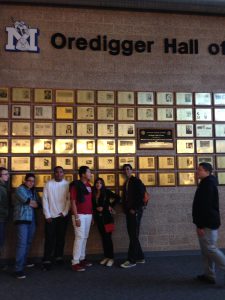 March has been a very busy one for the Boys Hope Girls Hope Academy Scholars. During the past month, our scholars have participated in a variety of personal development and college preparatory activities – on top of their academics, of course.  With the Black &Veatch engineering explorer’s club scholars learned about the telecommunications industry. They visited the inside of a cell tower and spoke with engineers that design and run this essential technology.  Scholars also have taken part in the Girls and Brothers groups, provided by the Denver Center for Crime Victims.   These are gender separate support groups where scholars can explore a variety of teenage issues, such as self-esteem, anger management and healthy relationships, to name a few.  The facilitators explore topics that are relevant to the participants in these eight-week sessions.  During spring break scholars traded three days of precious sleeping time to visit two college campuses: Regis University and Colorado School of Mines as well as the Junior Achievement Finance Park, where they experienced, for a day, an economy and lifestyle based on a given job, family and income.  This was certainly an eye-opening exercise on the role that money plays in our lives.

In addition to the extracurricular activities, our scholars also completed the third quarter of their academic schedule on March 13th and kicked off their fourth and final quarter of the school year the following week. Of our 22 scholars 19 finished the quarter on good academic standing, which includes having at least a 3.0 or higher GPA.  Andy and Maribel showed increase in their GPAs two quarters in a row!  In addition, congratulations are in order for Mayra, Nathan, Jesus N., Laelani, Kalil and Brandi for raising their GPA over last quarter.

Lastly, the BHGH staff is excited to report that the incoming 2014/2015 cohort of scholars is well on its way to being discovered. We have received dozens of referrals from South Middle School, North Middle School, and Aurora West Prep.  The selection process will take much of the month of April; however, we will be prepared to announce the new cohort before the end of the academic school year.