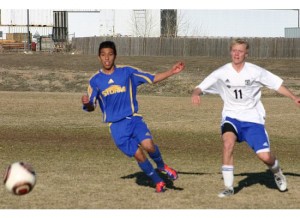 April showered us with educational opportunities and brought us many flowers of enlightenment.  Life in the Boys Hope Girls Hope homes rarely gets boring.

Alexis and Aaliyah partied it up at prom while Stephanie prepares for her Catholic celebration of Confirmation.  Adan and Ahmarri have been hanging out with their mentors, dining at fun restaurants like Red Robin and Cheddars and racing each other on the go cart track.  Darwyn has been playing hard on the field.  His team has won every game in his league and has only lost three throughout the whole season.  The scholars are excited about their upcoming summer camps and Regis courses.  Video game camp is a huge topic of discussion for Adan…he often comments that he would like to be a video game designer when he grows up.

The scholars had a blast at the musical, Wicked.  This is a story about what happened before Dorothy left Kansas.  It features Glenda and her sister, Elphaba and the roads they choose in life.  It wasn’t just for our girl scholars!  “It was awesome,” said Darwyn.  “The singing was amazing and Glenda was beautiful.  I had never been to a musical like that before.  It was a really good experience.” 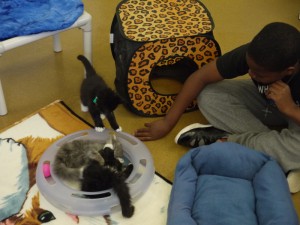 Scholars also had their share of community service this month.  They volunteered at The Rocky Mountain Feline Rescue, doing everything from feeding and giving the animals fresh water, to playing and cuddling with them—the scholars were begging to come back. Ahmarri loved snuggling with the kittens and wanted to take one home…staff said he could have a fish instead.