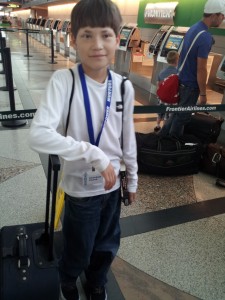 They’re fighting back the tears and savoring every second of summer they can.  Last trips to the pool, summer camp goodbyes, and backyard soccer finals fill the last days.  Although the fun and freedom of summer will soon end, scholars are eager to see their school friends and make even more at their new schools!

Before moving on to the school year, let’s have a summer recap!

Adan came back from his Boys Hope camp, held in St. Louis.  He met multiple scholars from various Boys Hope homes around the country and to his surprise, concluded that the rules are the same everywhere!  However, staff made him declare that Denver was the best.

Jose Luis, our exchange scholar from Mexico, returned to his country, promising to keep in touch with all of his friends here. During his visit he was able to see many areas of Denver including; downtown, the zoo, different hiking scenes, the history museum, and most exciting, IKEA!Ulises and Ahmarri will come home soon from Geneva Glen Camp in Indian Hills.  On the way there, they vowed to stay together and were nervous about being at a camp with 250 other kids.  Within five minutes of arriving the staff and Ahmarri’s mom, Angela, had a hard time getting their stuff to their cabins as they ran off with their new friends.

Jorge attended journalism camp on a scholarship while Luis became very involved in Tae Kwon Do.  Jasmine and Carolina attended a sports and music camp in beautiful Aspen, while spending a week with Carolina’s mentor.

Before you know it, the scholars will be attending their first day of classes!