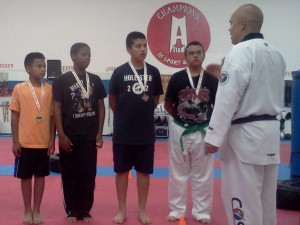 September activities definitely kept us busy.  With eight boys and five girls, the logistics that keep this place running have to be tighter than FedEx.  We’re always on the go so if you haven’t seen us in a while, let us fill you in on the adventures of Boys Hope Girls Hope.

Luis competed in his Tae Kwon Do trials and is now a “Green Senior” belt while Adan advances in ancient sword fighting tactics (don’t worry, it’s a wooden blade).    Alexis and Aaliyah keep up the college preparations, with Jorge following close behind.  There are several college fairs that Jorge and our other scholars will have the opportunity to attend.  Earlier in the month Darwyn had an athletic injury on the field.  He was blocking a kick and broke his ankle during the play. He still hobbles to every game in order to cheer his teammates on!  Elias prepares for swimming lessons and will start up piano lessons again next week while Ahmarri waits for basketball season.  The scholars volunteered at Bessie’s Hope where they sang songs and made flowers for individuals at the nursing home.

Another highlight of the month was Luis’s birthday party.  His family bought an entire pig and smoked it in their own backyard.  The fiesta included traditional Mexican cuisine along with chill music provided by his uncle who is a DJ.

Mentors continue to take the scholars to do cool things.  Everything from movies and sports games to recreational flying!  Stephanie, Darwyn, Adan, and Elias have all gone flying around the Denver area with their mentors!

Thank you to all of our wonderful volunteers and donors who make all of this possible for the scholars!