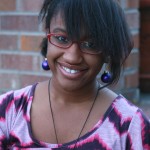 This is a poem by a Girls Hope scholar, Shira’z, describing the December happenings at the Boys Hope and Girls Hope homes.

December came along, the snow had a delay
And it was a special morning on Saturday
The scholars and counselors had a trip in place
The Air Force Academy had a tour
That was just what they were looking for
After that, a picture was set for all the scholars to take
Cold, frosty weather bites their skins as they are out
In clothes meant for… maybe fall… basically a time with more sun
Wasn’t very fun
Then Community service came up
Angel tree didn’t have much they could do
So hunger and boredom ate the scholars
But suddenly things got better
Like God came in giving them autonomy
So they can go find things
To do for that community
Their creativity started flowing
Rivers, banks, pools for swimming
They made gifts for their mentors and families
And they were rewarded with Kohl’s shopping spree
Where they were basically given 100 dollars a piece
Then to top it off, a Christmas party!
With gifts, family and lots of treats
Everything’s perfect and even better, they all got to leave
For Christmas, New Year’s and maybe… part of a week
Just enough time to lay off on the mind and turn on the heart
That’s brightly lit like some kind of star