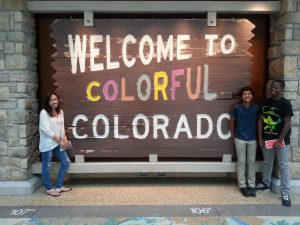 After a two week break at home with their families the scholars returned to the program rested and ready to take on the second half of the school year.  Through the first four weeks of the new academic session, all of our residential scholars are off to a fantastic start at their respective schools, proving the importance of effort and dedication when given a fresh start.

The second half of the school year will certainly be a busy period for our juniors, as they are called upon to increase their academic efforts and demonstrate their well-rounded skills in preparation for the college process.  Jocelyn has began an ACT preparation course at Grandview High School with hopes of acquiring test taking skills that will help her standardized scores compliment her excellent first semester grades.  Regis Jesuit held a junior college night in which parents and students reviewed key information required for moving forward in their college searches, which will come in handy as the students look forward to their spring college visits.  Additionally, Laura will be starting her service project at a local thrift store, and will hopefully encounter experiences similar to those that Luis, Darwyn, and Jorge had during theirs in previous weeks.

While the juniors look down the line to the college application process, our two eighth graders, Ahmarri and Denise, are undergoing a similar process in their search for the right high school.  Both Denise and Ahmarri took the Regis Jesuit entry exam and are eagerly awaiting word from the admissions offices in the next few weeks.  In the meantime, they both attended an informational meeting at Grandview High School.  We wish the best of luck to both Ahmarri and Denise as they move forward and would like to thank all of those who have helped them thus far in the process.

In addition to the impressive academic performances our scholars have shown, we are also proud to see some of them demonstrating their artistic abilities as well.  Jorge has been fitting a ton of work into a loaded senior schedule, but has found an outlet in both theatre and music.  Jorge is currently a cast member for the spring production of “Life is a Dream,” an upcoming play put on by the Regis theatre community, which will debut in the brand new Regis performing arts center that is scheduled to open soon.  As if school and theatre wasn’t enough, Jorge, our lone senior, has also been practicing for upcoming musical auditions for colleges such as CU Boulder and the Berkley College of Music.  While our oldest scholar has been active with music and theatre, our youngest, sixth-grader Elias, also has some art to brag about.  As an A-caliber art student at Liberty Middle School, Elias will have one of his pastel paintings featured in an art publication distributed through the art department at Liberty.

Thank you again for making all this possible!  We invite you to come visit us!  Just let Mary Fran, mftharp@bhgh.org , know if you would like a tour.