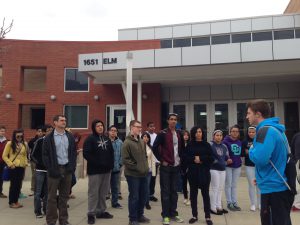 Though March went out like a lamb in terms of the beautiful Colorado weather, it definitely went out like a lion for our busy Boys Hope Girls Hope scholars.  Spring break was the light at the end of the tunnel that served as a major motivation for the students, who had loads of course work and exams to complete before earning their first break from class since the winter holidays.

The first planned activity for spring break was a tour of prestigious science and engineering school Colorado School of Mines in Golden.  Six of our residential scholars made the trip to Golden to experience a campus tour, ask questions about an appealing four-year college, and get a sense for what a college campus looks and feels like.  Many of the scholars asked questions about potential employment opportunities following obtaining a Mines degree and showed interests in some of the answers they were given.  Darwyn, who has been interested in engineering since he began at Boys Hope some years ago, was drawn to the aeronautic engineering program, whereas Laura learned of potential opportunities to pursue her passion in medicine through majors such as biology and biomedical engineering.

Two days later the scholars were back on a college campus, this time at Regis University in northwest Denver.  Regis is different from Mines, as it is a small, private Jesuit school in an urban setting, a combination that is better suited to some of our other scholars.  Regis University matched up our students with their chief diversity officer, who was able to share helpful information for minority students looking to apply to Regis.  The diversity staff arranged a scavenger hunt through campus that allowed scholars to see and learn about the history and makeup of the university in a fun and interesting way.  Luis, a junior who has been looking for small class size since the first day of his college search process, was drawn to the average class of twenty-one students, as well as the bountiful access to retreats and faith-based activities.  It was encouraging to see our scholars evaluating each university based on their personal needs and interests to make mature and insightful observations that will be key when moving forward with the college search process.

The final spring break activity was a trip to the Junior Achievement Finance Park in Thornton, attended by Adan, Laura, and twelve other Academy scholars.  The Finance Park provides a simulated experience of being an adult with a job, family, bills, and expenses, helping our scholars get a taste of what life will soon have in store for them.  The folks at Junior Achievement set each student up with a hypothetical job and income, which the students then needed to use to budget fictional expenses such as buying a home, paying for utilities, and maintaining a car.  The activity was very hands-on and granted the students independence in figuring out the budget that fit best for them.  Though some of the math was difficult and some of the calculations were time consuming, both Laura and Adan enjoyed the chance to role-play the part of an adult for a few hours.  Once the activity was over, however, they were more than happy to go back to being teenagers who could enjoy the rest of their spring break.