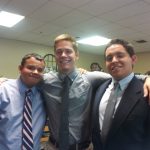 August commenced with our four Junior scholars and AmeriCorps volunteers returning from their weeklong adventure at Boys Hope Girls Hope Collegiate Prep in Aurora, Nebraska.  The camp was attended by rising high school seniors and incoming college freshman from across all fifteen BHGH affiliate cities, allowing the scholars to share stories and engage in learning exchanges with hopes of improving the BHGH experience.  The camp also placed a special focus on getting prepared for college and life after Boys Hope Girls Hope, which was achieved through daily workshops that ranged from discussing fears about the transition to a university classroom to writing a college-level essay.  When the workshops were over, there were opportunities for athletic events, dance parties, scavenger hunts, and other team building exercises.

Luis, Darwyn, Jocelyn, Laura, and Jack also toured Nebraska Wesleyan University with the other rising seniors and ASCs, giving the scholars a look into a unique liberal arts university in a new part of the country.  While it was a busy and enriching week, there was time to unwind before the flights home, as the week concluded with a decades party that included hula hoop contests for the 60s, disco dancing for the 70s, and photo booth for dressing up in the crazy styles of the 80s.  By the end of the week Boys Hope Girls Hope of Colorado had learned a ton and made lasting friends from across the country.

With school quickly approaching in the middle of August, the houses made sure to utilize the start of the month to squeeze as much fun in as possible.  Javier and Adan attended a two-week camp at Geneva Glen and came back singing campfire songs and sharing new games with the other scholars.  Elias and Destiny journeyed up to the Wyoming border for their EducoAdventures camp, an outdoor activity camp that taught the students about the beautiful open spaces Colorado has to offer through hiking and camping.  Aimee organized a tubing trip in Golden as a chance to escape the heat of August, and all had a blast.

Classes at Regis Jesuit, Grandview, and Liberty have since started back again and all over our scholars are off to great starts.  The girl’s house GPA is currently above a 3.5 and the boy’s house are hovering just below that mark, with ambitions of soon reaching the milestone.

August has also marked the arrival of a new face and the departure of two familiar ones.  Katie has joined on as a Residential Counselor at the girl’s house after recently graduating from University of Albany in New York and is off to a great start with the scholars.  Katie is replacing Brandi, a Residential Counselor of two years who is taking her talents to Melbourne, Australia to work with a family and their three sons there.  Additionally, recent graduate Jorge has moved into Regis University of Denver and is currently attending his first semester of freshman year.  We would like to welcome Katie to the BHGH family and wish Brandi and Jorge the best of luck on their amazing, new paths of life!