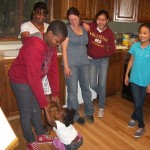 Our first family potluck was a huge success! Over 30 people were at Girls Hope for the event, including the families of two potential new scholars.  Each family brought a dish to share and the scholars were thrilled to have meals from home. They were also excited about the amount of leftovers!  After everyone left, the scholars took advantage of the beautiful weather and started a game of tag outside before they settled in for evening study time.

Our community service event this month was with a program called Bessie’s Hope.  Bessie’s Hope is an organization that works to enhance the quality of life for nursing home and assisted living elders.  They believe in bringing generations together in mutually rewarding relationships.  BHGH was matched with a nursing home in Denver and spent the afternoon visiting with the elderly.  We got to know the residents and even played a game of Charades.  The Bessie’s Hope coordinator had all positive feedback about our group and was amazed by how well each of the scholars interacted with the elders.  Afterwards, many of the scholars expressed that it was a rewarding experience and that they were surprised by how much fun they had.

Our scholars participated in a bike clinic at the Boys House.  Dave Bauer and his assistant donated their time and

expertise to teach the scholars some basic upkeep skills, as well as bike safety.  “They came and fixed our bikes,” Ahmarri said.  “That was pretty cool.”  They demonstrated how to fill the tires with air and how to check the chains.  They also brought along new bikes for the homes, as well as helmets and bike locks.  When asked what he thought of the afternoon, Adan excitedly replied, “I got a new bike!  I know about bike safety now!”  Our scholars are now well equipped for a safe ride around the neighborhood.

The Girls Hope scholars attended Swan Lake at the Colorado Ballet thanks to tickets that were generously donated by board member Susan Bailey.  The girls were excited to dress up and spend the evening downtown.  They gave glowing feedback about the experience. Stephanie said, “ I really liked it and the dancers were pretty.”  Aaliyah agreed and said, “It was beautiful.”  Our youngest scholar, Carolina, said, “ I wish I could dance like them!”

The Girls Hope scholars also participated in the annual Fall Spruce Up Day at Regis Jesuit High School this past weekend.  They joined others from the community to help beautify and clean up the campus.  They first attended mass at the Girls Division, then spent the rest of the morning picking up trash, raking leaves, and replacing mulch.