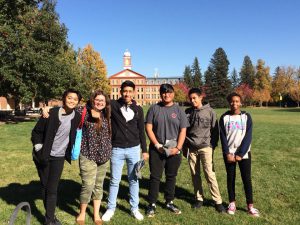 Throughout the week of September 19th to 22nd, I attended Regis Jesuit’s Kairos #49. Kairos is a yearly retreat for RJHS juniors. Kairos is a Greek term which literally translates to “opportunity”. The retreat is known for changing the lives of all and anyone who is willing to open their heart to change and growth. I can say with confidence that Kairos is something  all underclassmen look forward to during their time at Regis Jesuit as many upperclassmen brag about their experiences; obviously, I am no exception.

When I look back at that week in Colorado Springs, the first image that comes to mind is the sight of that beautifully wooded landscape behind the big green metallic letters that read “La Foret”. The camp felt far enough from civilization that we could have enough space to explore each other, ourselves, and the outdoors. From that moment, I immediately learned that the rumors about Kairos are true and that once-in-a-lifetime opportunity would be life changing. The end result was not disappointing, so I was able to walk away from the experience as a new person. I learned more about myself and others in a week than I would have in two years! My only regret is not making myself more vulnerable despite being among some of the last people I would seek help from. I ended up enjoying getting close with everyone I did, and I only hope that upcoming Kairos attendees get to have as wonderful of a time as I did.