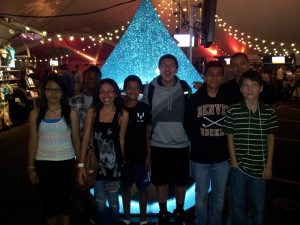 The Boys Hope Girls Hope scholars had a chance to go to a Cirque du Soleil performance last week and then wrote about the experience.

“As soon as this new act began it drew my attention.  The lights went dim; the crowd grew quiet as the room slowly became a freezer.  And out of the blue came a rather young but beautiful girl dressed in gold. She held in her hand a small bone.  Below her rested a plethora of those bones but all different sizes.  As she laid that first little stick on top of a bigger sturdier one I calmly watched without any worries.  The bone or stick stacking continued as the whole crowd gawked at her mesmerized by how steady she was, it was like staring at beautiful tree so calm without worries.  As she stacked more and more I grew nervous – my palms began to sweat and my breaths were deep and worried, and the background music did not help one bit since they were sounds of heart beat.  Then finally the girl laid her sculpture of stacked bones on the tip of another very thin bone.  The lights came on and the crowd went ballistic!  You could probably hear the roars of the from miles away.  You could tell in the girl’s face there was a sense of relief as well as in the rest of the crowd.” by Ulises, Sophomore Boys Hope scholar .

“This wasn’t just any circus performance, it was more like a musical play with lots of flexible, strong looking performers.  I sat very still wanting to pay attention to a short, pretty girl, who was wearing a white swimsuit-like costume.  Miranda was her name.  She first hung on a hula-hoop with a mermaid above a tank filled with water.  Standing on top of a tank, she had a smile on her face as she danced on her tippy toes.  Later, a stick was given to her.  A stick with a brick on top.  She placed her left hand on it and balanced all of her body on top of it.  Flexible as she was, she put all her weight on that stick and balanced on it as she was bending backwards.  The audience clapped and cheered of amusement.  Another stick was handed to her, as she did the same and balanced and bent on them both.  The lid came off the tank, and she dived right into it.  She swam dramatically in it.  She flipped and twirled inside.  She came back up squeezed the water out of her hair and wiped the water on her face, then she went back down to swim again.” from Jocelyn, Junior Girls Hope scholar.