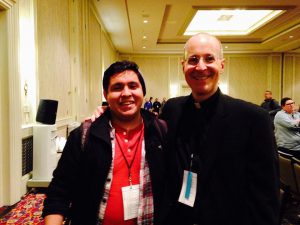 Two years into my college career, I never imagined that I’d be where I am now. I just declared a major in Music Performance (previously I was just a Music major) with a minor in Religious Studies.  I am looking forward to starting my summer job here at Regis University working as a Housing and Conference Assistant for the office of Residence Life and I’m going to be a Peer Minister, living and working alongside Resident Assistants in the Freshman dorms in the fall. All of this comes with the knowledge that only four years ago I was nervous to move to Aurora, Colorado and begin the process of being a Boys Hope scholar.

Sometimes my Boys Hope roots are more obvious than others. I often don’t have trouble sticking to the rigid schedule I’ve built for myself this semester.  I’ve learned how to study just about anywhere, though I do have a preference for the desk just outside my room. I’ve also learned how to tackle any project that my bosses at University Ministry, where I am a work study student during the year, can throw at me.  That may be making a video, organizing an event, or taking several dozens of flower arrangements into and out of the chapel.

All of this success as a college student hasn’t come without some struggles. I still have a hard time saying, “No,” though I’ve gotten much better at it. I also sometimes sleep in more than I wish I had, and stay up later than I wish I would. But the trial-and-error process has paid off with a pretty large learning curve.

The biggest pay offs haven’t necessarily been academic, though. I have been a part of the Regis University delegation to the Ignatian Family Teach-In for Justice the last two consecutive years. I had the opportunity to go to Dolores Mission and Homeboy Industries in East Los Angeles last Spring Break. Of course I’ll be a Peer Ministry this fall, but I was also confirmed into the Catholic Church through Regis University’s RCIA program just a few weeks ago. I’ve also had the opportunity to travel to New York City, Milwaukee, and all over the state of Colorado because of the friends I’ve made and the connections I’ve built as a college student.

Only half of my college career is over, which is both exciting and nerve wracking. In less than a year I’ll be putting on my Junior Voice Recital, and a year from then I’ll be putting on my Senior Voice Recital. Maybe I’ll have the opportunity to go on or lead another Kairos retreat, or lead a service trip. I’m also starting the “theory sequence,” or the set schedule of sequential music theory classes that are essential to being a music major.  These are part of the reason my friends so often call me a music geek! I’ll also be taking more classes in my Religious Studies minor, including a class on Peace and Justice in Catholic Social Thought next semester. So much excitement!

Above all, I’m grateful to my parents, and to Boys Hope Girls Hope, for giving me the skills necessary to not only survive in college, but to thrive. Thank you!