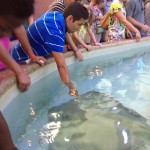 This past week the Boys Hope Girls Hope scholars were able to enjoy a fun morning at the Denver Aquarium.  This was the first time our scholars visited an aquarium.  They were able to see a variety of exhibits that included, but are not limited to, species in the desert, coral lagoon, beach, under the sea, rain forest and North America in general.  The scholars learned about the environments in which the species live in and were able to ask questions and learn more about each species that most interested them.  They were really excited to see the tiger and the otters.  They also had the opportunity to touch some of the larger stingrays with two fingers, and while some of the scholars were afraid at first, they all ended up touching them and were thrilled!  We ended our day at the aquarium with a nice lunch outside next to the live farm animals, in which some of the scholars got the opportunity to interact with the baby goats. 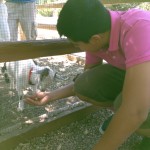 They were grateful for the experience and we are thankful for the generous donation that allowed us to live such a lovely and educational experience.