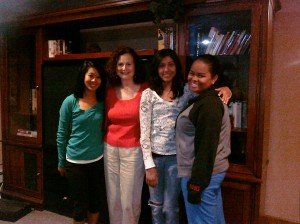 I recently had the privilege of working with a group of the girls at Boys Hope Girls Hope. I was able to take them through a six week process of examining aspects of their inner self and life goals. The process started with each taking a look at a pyramid of the foundational things to build on for their self-identity.  We looked at values, life visions, goals, feelings and beliefs and games people play. All of this self discovery opened them up to an understanding of how to direct their life from a strong inner foundation rather than allowing them to be ruled by outside factors out of their control.

The work I do in my practice as a Licensed Therapist and Transformational Strategist is to empower people to take control of their life through examining many of their inside silent saboteurs that keep one stuck in unhealthy patterns. My particular focus is on the subconscious programming that people formed early on that still impacts their life today. Some of my clients are limiting their business from being successful, others may want to excel in their career, sports performance, and many are in some type of transition from work or a relationship ending.  As a niche I address women who give too much and get easily depleted.

I like many of my clients have felt limited and not believing that I am good enough. I grew up in a doctor’s family where there was a lot of emphasis on performance and being successful.  I had money beliefs that stemmed from the way I was raised with very frugal parents that had money, but were very afraid of spending it.  This has limited me from feeling successful and being able to attract the business that I believed I deserved.

In my early career in counseling I would listen to people rehash their stories about why they are in pain and feeling frustrated with not being able to move on. I found myself getting bored with counseling thinking I am not suited for this field. I then got training in the field of coaching which got my interest because it was more about positive psychology. In doing more life coaching, I ran into the self-saboteurs that stand in people’s way of fully unleashing themselves. This led me into exploring the field of energy psychology which I believe addresses these self-limiting beliefs that hold people back from optimal performance, freedom from anxiety, and stress.

In the past several years I have been trained in a variety of transformational methods and processes that will clear out these barriers and unleash people to new heights.  It is so fulfilling when people come in and say… “you mean I have been in years of therapy and you were able to pinpoint and clear out some of the rooted aspects of what is keeping me stuck so quickly.”  I tell them I am so grateful for the techniques and methods that I have learned that are available today to help speed up the process and get people on their way to living their best self!

My name is Suzanne Simpson. My website is www.innerconnectedhealth.com   and I can be reached at (720) 981-0713  suzanne@connectcoach.com.