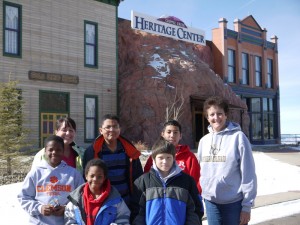 The Boys Hope scholars visited Cripple Creek for their enrichment activity in February.  After a two hour car ride, they had lunch, watched a movie about the region and visited exhibits at the Heritage Center.  This was followed by a stroll on main street to watch the ice carvers make giant sculptures honoring the military.  The artists were manipulating 300 pound ice blocks and using chain saws on ladders and scaffolds to make their creations.  Scholars had a great time watching the carvings being made as well as playing on some of them and eating standard fair grub.  The visit to Cripple Creek ended at the Lawmen and Outlaw Jail Museum where they got to try on inmate costumes, pose for pictures behind bars, and learn about the lives of inmates “back in the days.”